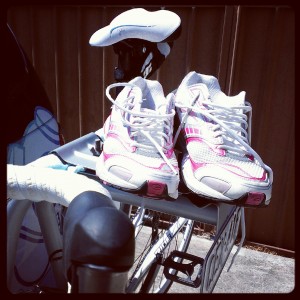 I am attempting “photo a day” for Oct and today’s topic is “where I stood”, my thought was – in these shoes, that is where I stood today.

Those that know me will know I can have a potty mouth if it is warranted (more often than not), so those who don’t hold on for the ride.

I arranged with a friend who is also training for a triathlon in a month (not 5 days like me, aaargh) to have a little swim/ride training this fine and sunny morning, I had recently purchased my all lycra tri-suit (the most unflattering garment on the face of the earth) and thought I better test it out before the big day, so not wanting to pay to attend a heated pool for just 300m of swimming I suggested a dip in the Ocean pool at Thirroul a lovely seaside town just 1 suburb away as they have a nicely tiled pool that they pump in the sea water every few days (I think), brilliant I thought to myself and then take off for a cycle.

The water was FUCKING FREEEEEEZING, hence why there was only 1 other crazy in the pool and a few others dangling their toes. I mean take your breath away COLD, unable to swim with face in water COLD, gasping and squealing COLD, people laughing on the sideline COLD…..

Being the greatest friend on the earth I opted not to wear a wetsuit over the top of my all flattering lycra ensemble as my friend didn’t have one and that would be unfair to her …..  who is the idiot now …… MEEEE.

FUCK ME….. I wanted out almost instantly and it took 2 laps (of the 6 that we were doing) to even contemplate swimming with my face in the water, of course it warmed up as we swam or our internal organs started to get used to it and shut down but as much as I wanted to get out every single lap we persevered an then had to swim more than half way across the pool to get out at the stairs, my freezing arms would not have lifted me out.

Upon Googling right now the data I have retrieved is the water Temp at Thirroul on this fine day ranges from 16.4 °C to 19.4 °C, given that we were there in the morning and for drama purposes I am going to say it was on the colder end of the scale and had I have thought to Google last night I am guessing that I would have paid big bucks for a heated pool.

Ok enough of the swearing, oh there might have been a bit more as we struggled to get our limbs moving and dress to get on our bikes.

Then we headed up a hilly route to get in a bit of a cycle, the aim of the day (well for me anyway) was not to do a blistering pace, but to quote NIKE, just do it, I had not practiced these 2 elements together before so I am glad I did. There was 1 “Nemesis” hill enroute that was right at the end of our ride and previously I have had to get off my bike and walk up, albeit I used to do it towing Missy around in a little trailer so it was more difficult back then but I successfully conquered it and plan to tackle it more often. So 11.5km later our training was done and I headed off to the kiosk to grab a Chai latte and bring something home for hubby.

Quick change of topic to food, something I seem to always do is buy some sort of food item with the coffee order and today was no different, I bought a raspberry and almond muffin with the intention of sharing it with hubby. Well not paying attention he proceeded to devour half of it before I mentioned to him that it was sharesies, and in act of “I don’t know what came over me” I said don’t worry you have it, and I was OK with it, no FOMO* at all. *See my previous post about FOMO.

Who is this girl and where did she come from?

2 thoughts on “Tri Training – nothing like cramming for a test”