When I started this Blog I set myself some goals and 1 of them was to complete the Mud Run. Now at the time it all seemed like a whole lot of “as if that is really gonna happen”. Just over a month ago the alarm went off in my Outlook Calendar to tell me that it was time to registered to get the slightly cheaper rate, nothing like saving $5-10 to stop you from “NEVER EVER” doing it.

I must say that this last month went Super fast and the last week, like a rocket. Before I knew it today was the day. Now it was a bit of a weird day because normally with an event you are out the door early ready for a 9am start. Today was different because our start time was 2pm, so fluffing around the (air-conditioned) house waiting to leave was a weird feeling and I may have been in La La Land and not really comprehending what was ahead of me.

So I rounded up the troops, picked up a few gal pals and hit the road. We ended up with a team of 8 and were called Southern Commercial “Mud” Divers due to a bit of sponsorship from my wonderful employer who is also my MIL and FIL.  They provided our fantastic singlets for the event. 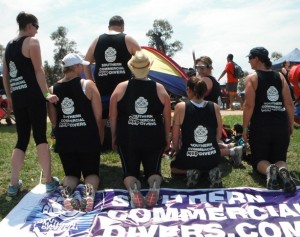 The team showing off our Shirts.

We arrived in the 40 degree heat (Celsius) at the Mud Run venue and headed straight to the registration tents and grabbed our number bib, pitched ourselves a sun shade and I tried to chill out and relax before our time slot.

It was not long before it was time to head down to the starting line. With a 2pm starting time they were letting groups go at 5 minute intervals, we were out of the blocks at 2.05pm. 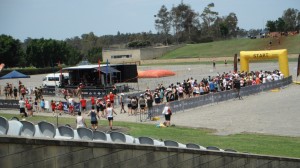 The mob ready for the 2pm start time.

Of course you have barrels of energy at the starting line and we powered off over the first obstacle which was hay bale steps and then up and over a brick wall. Then it just seemed like an endless mirage of hills with not a drink station in sight. I think the first run/walk and hurdling over a few obstacles to the first drink station was the hardest, it was sooo hot and dry. I am not going to sugar coat this for you it was hard and hot and I must say I walked ¾ of the course. I was the slowest in our team and really felt like I was holding everyone back. 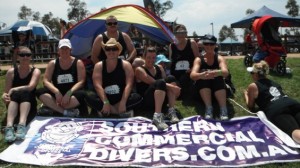 The team ready to start the event.

I’m going to head off on a tangent at this point and give you some background info on what has happened this week. Monday morning I woke up and my world was spinning, literally. My head had not even come off the pillow and I felt dizzy. When I tried to walk I was bouncing off the walls like a pinball in a pinball machine. I have had this problem before and it was diagnosed as low blood pressure and mild ear infection (among other things). Before I lifted my head off the pillow I got on the phone to my Medical Centre to hook up an appointment ASAP. So the doc checked me over and my ears and blood pressure were fine, she sent me for blood and urine tests and after some other testing suggested that it could be Vertigo. She also said that my neck and head were very tense and that I should see an Osteopath, usually when I feel this tight I see a Chiropractor, she said Chiro was not a good idea. Long story short, I managed to get myself a late appointment on Monday to see Osteo and by Wed I was starting to feel slightly better, Thursday I got my blood results and nothing was out of the ordinary, I also managed a cardio workout and by Friday I almost felt normal.

So back to Mud Run I was a little reluctant to push myself tooooo hard and took it easier than I might have, if I hadn’t had the medical issues of earlier in the week.

My goal for the Mud Run was to finish, have fun and have a go at each obstacle.

I lost count of how many obstacles were on the course but some of the memorable one’s were; the first water/mud pit where my friend Colleen jumped in with a giant splash; the big pipes called Birds Nest which had wasp and other critters nested all over them.

My friend “Claustraphobia” and I could not start nor complete an obstacle which was a water filled trench with black plastic over the top where you could not see daylight at the other end, my issues with this was if it was a black tunnel with no water I may have considered, but the combination of water and enclosed space was not on my fun list. The only other obstacle I did not attempt was a balance beam which was barely 2 inches wide and if you fell off it was into a dry pit which looked like a 6ft drop. I didn’t think it was a good idea after having dizzy spells earlier in the week.

Some of my accomplishments were the cargo net, wobbly as hell, higher than I thought but once I was on the downward side I was relieved and satisfied that I completed it. My favourite was the Commando crawl through a watery mud pit which had low flying bunting hanging over it, second fave was the giant Slip ‘n’ slide, there are some benefits to being heavier, you get way more speed on the slide and I managed a graceful or disgraceful tuck ‘n’ roll at the end as I was still travelling at a great speed when the slide ended. I also enjoyed the giant inflated pillows near the end, bouncing over and the horrible last obstacle that was a wooden ramp with a rope to pull yourself up and over. My upper arm strength was just not good enough to get me over it, so after splattering and sliding back down the ramp I walked around. I didn’t want to bruise and batter myself on the last obstacle.

So all in all, out of the 20 or so obstackes, I didn’t attempt 2 and was unable to complete 1. Everyone on the team had fun, I was the slowest of our team but didn’t care too much because of the week I had and the heat I wanted to finish, not collapse. I consider this type of event a “Fun Run” and loved getting down and dirty in the mud. I will be booking into doing something similar again soon.

PS: I hope to get some action shots on here when the Event Photographer’s release them. 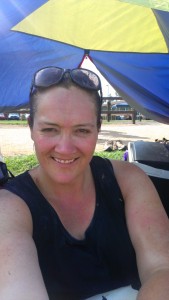 I finished, still smiling but a little bit tired. 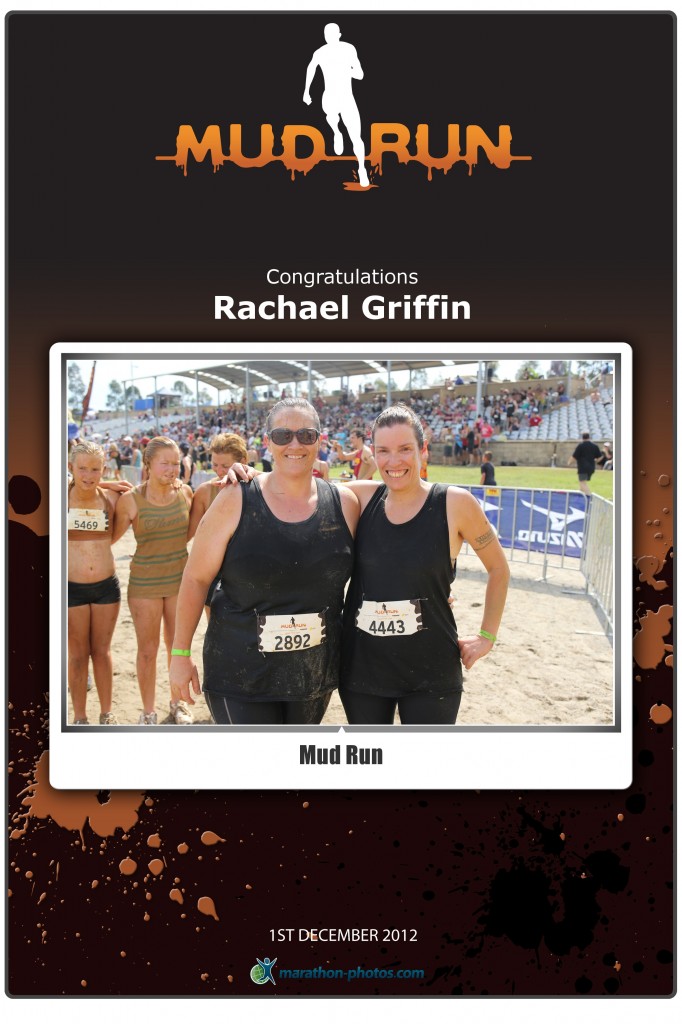 Here we are crossing the finish line. This picture certify’s that it actually happened.

5 thoughts on “Fun fun fun on the Mud Run”