Monday – would have been my first week back this year to my normal Monday night session which mainly focuses on Indoor Rowing, however hubby was running a little late back from a course he has been doing and it would have been a tight squeeze to get there on time, I opted instead to have some quality time at home, something that hasn’t happened a lot lately.

Tuesday – headed off to my gym EnVie to do a cardio session and wanted to start getting some incline on the tready. So with some guidance from my new program I was doing to do a 30 minute interval. With the incline between 1 and 2, I did 5 min warm up, 2 mins running, and 1 minute walking, initially I found the incline quite difficult and had to reduce my speed, after a few intervals it started to get easier, so I upped my speed, then a few intervals later I realised that the incline was not working, hence why it was getting easier, I had a little chuckle to myself. Anyway I still did the 30 mins and completed 3.2k.

Wednesday – I was wracking my brain to remember what I did and then I remembered; my poor little munchkin was sent home sick from Daycare with a vomiting bug. When I went to pick her up she was asleep quarantined to the far end of the room and I picked her up and she was very cuddly. As I was taking her out of school she started vomiting again. Once I got her home she had 2 more upchucks and after the last 1, she said, I’m hungry and she was miraculously better. They say it goes as quick as it comes and luckily for her and all of us that was the case. I didn’t even contemplate abandoning the family for exercise; I wanted to make sure she was ok and to be readily available for cuddles.

Thursday – another session at EnVie and I did a 5 minute warm up on the treadmill and then I had another go at a 1k time trial, my last attempt just over 2 weeks ago was 6min45 I managed to beat it and did a 6min38, gotta love a mid-week PB. I finished off with some of my new weights program but only managed about 30 minutes before someone got a bit whingy in the unsupervised kiddy area. I snuck in a few abs including planks before I left.

Friday – I got out of the house a bit late in the morning and after Daycare drop-off went to the Continental Pool (where naked old ladies have a chat with you in the change room – read about it here) and did a quick 20 minute swim. I wanted to get in and do 300m straight off (same as the upcoming Triathlon) and then I did another 300m and tried to speed up a bit every 2nd 50m, not a big workout but I was contemplating not going at all. 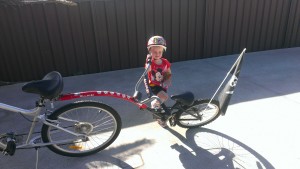 Loving the Tag-along bike, only her 2nd ride and she is getting the hang of it.

Sunday – Miss 3 and I got up and went for a bike ride with her new Tag-along behind my bike, we had breaky at a Café and then had a big play at a park and then some more riding before heading home, when we got back we headed down the beach for cool off. A lovely morning. Later in the afternoon when hubby got home from a weekend of Paintball, I headed out to go for a swim (too windy for another ride), drove to a nice ocean pool only to find it was empty and being cleaned, then I drove to another pool and it was really dirty and so windy that the car was getting blown around in the carpark, I know there is a saying “if you wait for the perfect conditions you will never get anything done” but it just didn’t look appealing, I felt a bit guilty for not just diving in, I might have another attempt in the morning. 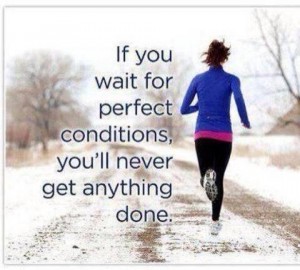 And so this now begins what all those in the know call “taper week” leading up to my triathlon next Saturday. Now I don’t have a real clue about tapering and I think for my distances it’s not extremely important. My understanding is don’t overdo it this week with hard exercise sessions and especially not eat too much food, slow and steady workouts and my personal thought (from all I have read) is no workout after Wed, which means 2 full days of rest before the event.