So here I was about to attempt my 3rd Triathlon – Tri the Gong, being run by Elite Energy and I was again tackling the Enticer distance.

The morning of the event Hubby was flying in from overseas bright and early so his parents were picking him up from the airport and on the way picked up Miss 3 at 5.30am.

For some reason I felt no pressure or anxiety and was really relaxed before this race and got a good nights’ sleep.

I was getting ready and loading in the dark. There was 1 benefit of going alone was it didn’t matter too much where I parked as I just got on my bike and rode to the registration tent. I had trouble at the registration area as I stood in the 40+ line and they couldn’t find my information. I spoke to an official who advised me that you are categorised based on the age you were last Dec, which was 39, yeehaa, so still with the younger gals.

I met up with my friend Colleen near the registration area and we hung together for most of the day. We stood in the transition area to listen to the briefing and then headed down for the start of the swim. Our swim start was delayed 10 minutes due to an excessive amount of bikes on the bike course. The swim was in the harbour a bit of argy bargy for the first bit and some congestion around the buoys but mostly open water. Colleen and I swam almost side by side for the whole swim and she got out about 3 steps in front of me. We certainly didn’t come last, as I turned around coming out of the water there were still a few behind us.

I jogged and walk to my bike and had a really slow transition, I was a little bit too focused on getting all the sand and grass off my feet and putting on my shoes and socks, meanwhile people were coming and going. This is something I really need to improve on.

The course for the bike leg was 4 laps and my main concern was forgetting how many laps I had done, someone said to me you will remember that hill 4 times and they certainly weren’t wrong. The course was mostly flat with 1 big uphill but then you had the added benefit of 1 big downhill, winding around the beautiful Wollongong lighthouse and to a roundabout at the other end. I did enjoy the course, getting up out of the seat up the hill and putting on the speed going downhill whilst gasping and grasping for water. I overtook a few people on the bike leg and there was 1 section that was quite narrow which always seemed to be where I needed to overtake, with a little bit of caution I managed to get past and not fall off or knock anyone else off their bike. I was having a laugh to myself doing a bit of Sesame Street counting, as each time I would go past the Start/Finish of the bike leg I would count like “The Count”, 1 ha ha ha haaaa, 2 ha ha ha haaa, etc etc and would do that a few times on each lap so I knew where I was up to, small things amuse small minds as they say, but it seemed to work for me. I still had that doubt when coming into the finish line – “did I finish all my laps?”

I hate getting off my bike because it only means 1 thing THE RUN. I kept telling myself, its only 2k, you can run this far. My friend Colleen had said something to me earlier in the week which was “I don’t want to be the skinny person walking” and I must say, seeing people slimmer than me walking during the run leg at my last Triathlon almost gave me permission to walk and I did. This time I was determined to not walk at all. I remembered to grab my security blanket which is my water bottle, that way if I got a dry mouth I would have a swig and be happy and not feel the need to walk to catch my breath. I also didn’t feel the need to walk through the drink station and reward myself with the water and a walk, so I was set. I declined the drink station and kept on running, there were many many times I wanted to walk, especially when I saw all the skinny/ier people doing it. I just kept up my shuffle, I was being overtaken, every 2nd step but I didn’t care. I wanted to pick up the pace a bit but waited til I turned the half way mark and then up a small incline and once I got beyond all of that I went from a shuffle to a jalk (jog/walk as fast as a walk but still jogging – I made it up myself). In my speed terms a jalk is a nano second faster than a shuffle per kilometre. I was super excited to see the finish line and run under the giant inflatable NAB sign and then onto the official finish and even managed to pick up the pace to a Rachael Sprint (not as fast as anyone else’s sprint but faster than a jalk). For the first time in my Tri history as I was coming up to the finish line the announcer called out my name, so with a double fist pump in the air I crossed the line. The satisfaction of running the whole way was awesome, I was out of breath but excited. I had done my best and even if my best was last place, this time I was not concerned. 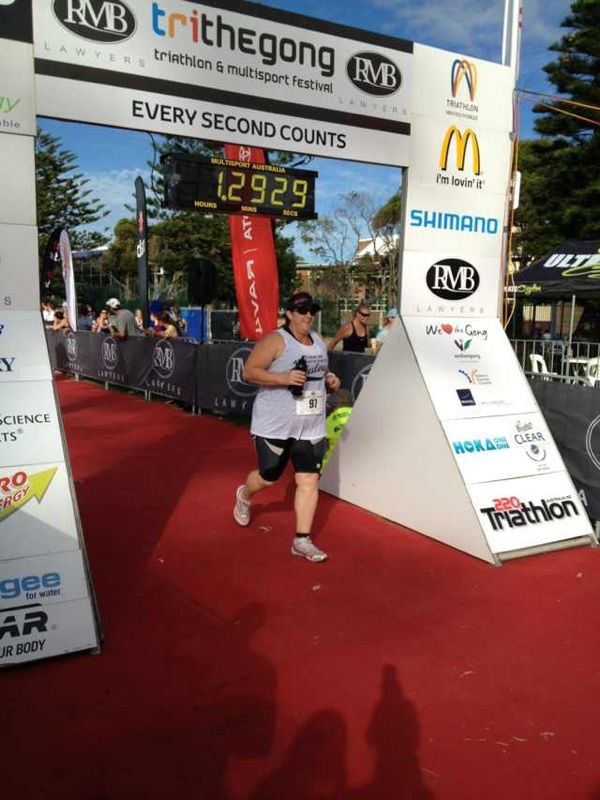 So the results were in, official 2nd last position (secret little cheer about not coming last), and finished in 46:28, now I was thinking that I must have broken some land speed records to improve from Husky Tri by over 12 minutes but then checked the distances and the bike leg was 1k shorter, but given that my average cycle pace is about 3min per kilometre I still made big improvements. I am not sure how accurate the courses for these events either but this race felt better (except for my swim/bike transition). 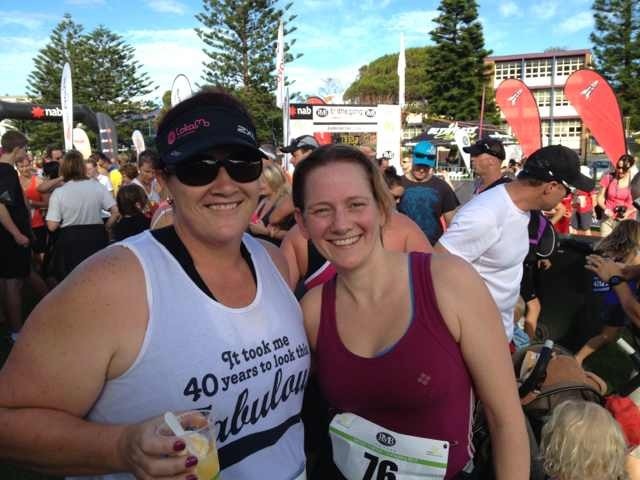 With my friend Colleen, she inspired me to keep on running. 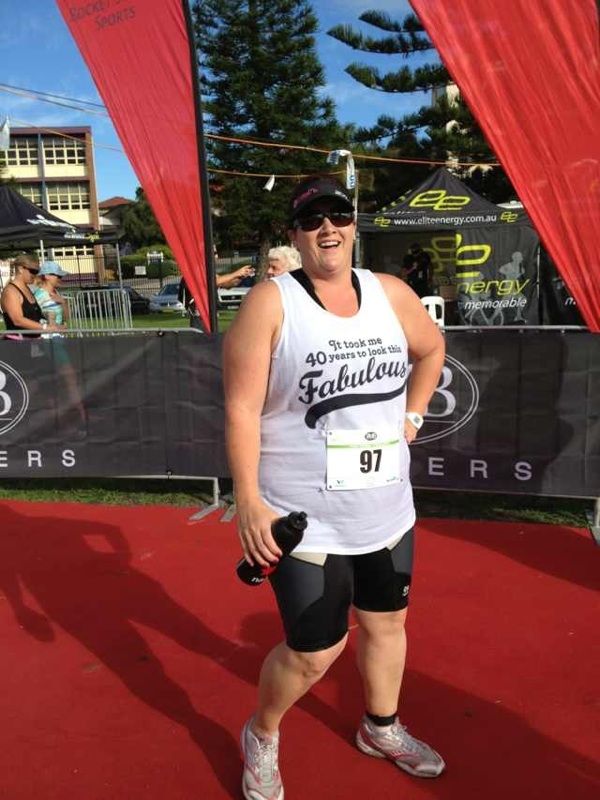 Gasping for air at the finish but somehow still smiling.