I did it I did it, I completed my first Triathlon, here is my story.

The 2 nights leading up to my Triathlon I had great difficulty sleeping. If I woke up in the middle of the night, either of my own accord or by Miss “Almost 3”, I would have great trouble getting back to sleep. I had so much doubt in my mind. Would I be able to do it? What if something went wrong? Will my ankle hold up? Will I look fat in Lycra? Well I know the answer to that last 1 is “yes” but I had to ask the question. 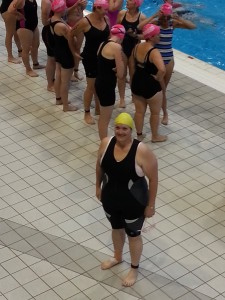 The picture I was reluctant to publish, but this is me wearing Lycra. The suit was really good for the event, just not good for hiding the lumps and bumps.

To de-stress a little I arranged for Miss “Almost 3” to go to my Brother’s on Friday night for a sleep over with her 3 cousins, whilst hubby and I got a hotel room right where the triathlon was being held, walking distance. We had a very rare relaxing grown-up meal and I was alcohol free and in bed early.I got organised early and headed off to the marshalling area, as I was walking over I saw the start of the kids (under 10yrs) Fun Run 1k event, I was so inspired by the kids, 1 little girl was either exhausted or scared running towards the crowd and the Event Marshalls got her moving and helped her and it brought a tear to my eye and a giant cheer from the crowd. 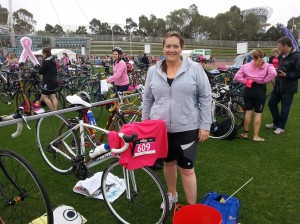 All set up for transitions before the event.

It was a bit daunting not knowing what to expect with my first Triathlon; however once in the arena the organisers were very helpful and guided me to where I had to go. There were over 700 competitors in the Long Course event which involved 300m swim, 9k cycle and 3k run. What amazed me was that there were all shapes and sizes ages and abilities and to be honest there were some quite large ladies. Before the event I asked Hubby what he was going to yell out to cheer me on and he said “Run Fatty” which I thought was amusing, however once I saw the variety of competitors we both agreed this may not go down well. 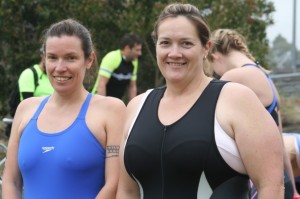 With my Facebook friend Christine who I only met IRL a few months ago because of our like-minded goal of doing a Triathlons.

I was very pleased to run into a friend of mine who I met IRL a few months ago from a Facebook Group so we stuck together and headed to the briefing poolside. The swim was in an Olympic pool, zig zagging around buoys to complete 300m, at the start you could dive off the side of the pool, it was staggered at 2 second intervals however once in the pool everyone seemed to bunch up, the water was really choppy. Before I got in I noticed that plenty of people were doing breast stroke, back stroke and doggy paddle and some even stopped at each end to catch their breath. I don’t propose to be a great swimmer however I managed to mostly keep my head down and did freestyle the entire way, even though I was very slow, I was happy with my result when I got out. 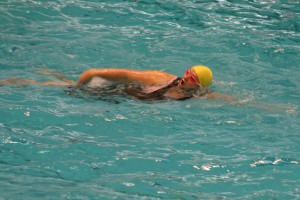 Pounding out the swim.

I had no real plan of attack, however once I got out of the pool everyone was walking to the transition area, I decided there would be no harm in running a bit, so I got moving and ran what felt like an eternity to get on my bike. The bike leg is my favourite, I feel like it is more of a cruise, with more of a muscle burn than a lung burn. The first lap of the circuit my legs felt like concrete stumps struggling to get moving after the swim but the final 2 laps of the course I felt better. The weather was a bit drizzly so I was really really careful on the corners not to wipe-out. I really enjoyed the cycle. 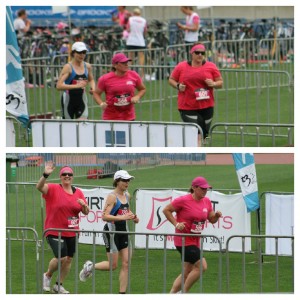 I jogged my bike back off the road and parked it ready for my nemesis “running” leg. Because of my sprained ankle I had not run for 4 weeks until 3 days before the event so my running fitness was not as good as it should have been. I took the extra second to put on my Lorna Jane sweatband “Never Give Up”; it is funny how looking at that can truly inspire you. The first part of the run leg was horrendous, straight up a long gradual hill, legs still getting the hang of running after the cycling. I wanted to quit almost straight away, I just thought to myself, don’t keep up with everyone else and I shuffled along at my own pace. I had to tell myself I could do this, the first 1.5k just felt so long, but when I hit the turn-around I was a relieved to know it was half over and managed to find a spring in my step for the last half. I ran most of the way, only a few walk steps after the water table to have a quick drink and about 20 steps up a hill near the end, I picked up the pace again to run up the long gradual hill which was just before running back into the Athletic Centre where the finish line was, it felt like I was finishing a marathon, running down the straight of the athletics track towards the finish line, once I shuffled into the arena I had my trainers voice in my head which said, “leave nothing in the tank” I sprinted the last 150m to the finish line, even overtook some people. 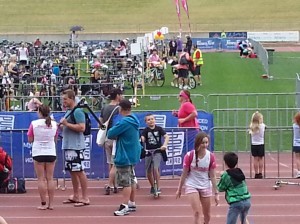 Sprinting down the home straight.

I freakin’ finished, I was still in disbelief that I had done it. I was a little teary after the finish until I found hubby and gave him a big cuddle (he gives great hugs).

To be honest when I got the idea in my head earlier this year to try to do a Triathlon I had so much doubt I never really thought I would do it and I seemed to have a stack of obstacles thrown at me in the last few months, with a never-ending cough, full on sickness, 2 funerals with friends and family, hubby away for a few weeks and a badly sprained ankle, I think these things were sent to test my dedication.  Once I registered for the event I was not going to let myself down.

I am pretty pleased and surprised with myself for finishing and now I know I could probably push myself a bit harder next time. 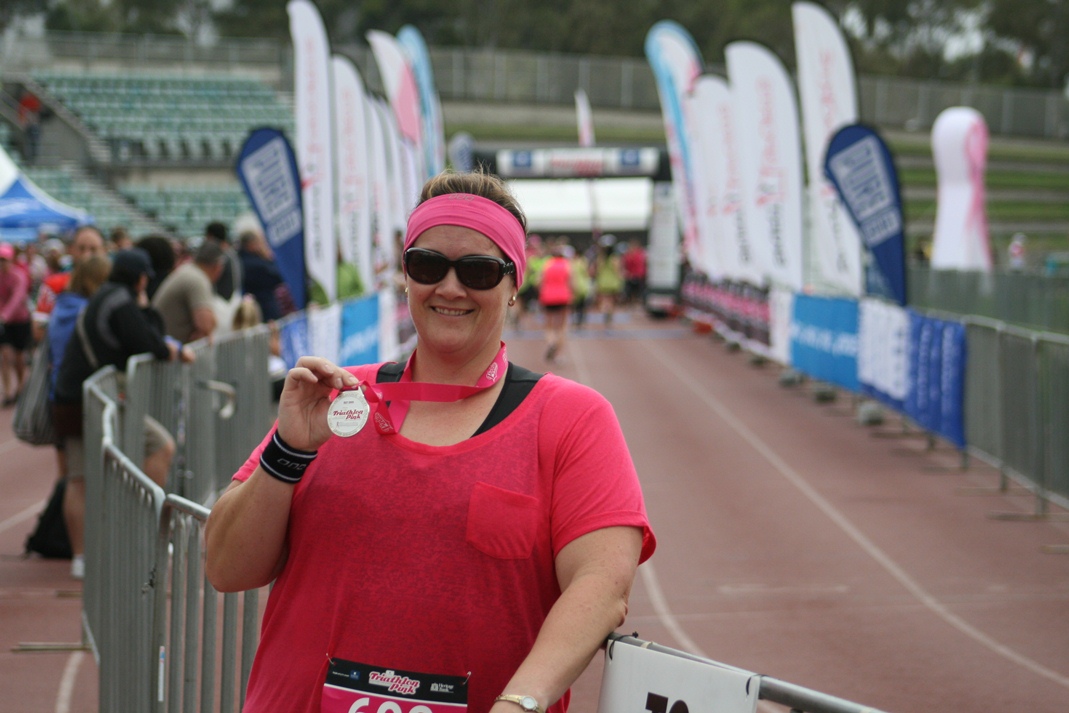 Finished and pretty proud of myself.

Update 9 Oct 2012 – So the results are in for the Triathlon Pink I came 681 position out of 774 competitors in the Long Course with a time of 1:09.57, pretty happy with that, I achieved my goal of not coming last, woohoo.