Monday – another fun session at Circus Monoxide for my Bootcamp class, this week we did forward rolls, backward rolls, and cartwheels and recapped on the trapeze and tissue moves that I am completely hopeless at. We also did a sequence of our own choreography incorporating the tumbling moves which was hilarious. We also did heaps of planking, front, sides and back, “ouchy”.

Tuesday – I was a bit sore from the Circus class but managed to get to the gym to do some cardio and also tested myself with a 1k time trial on the Treadmill, I have only ever done a 1k trial before on the road and I know they are a bit different, but I clocked up what I think is a PB of 6min45sec for 1k. Also did some abdominal exercises, doing this circus class has made me much more aware of the need to do ab exercises even if I hate doing it (something I have known all along but tried to ignore).

Wed – morning swim in the harbour (where the Aquathon is being held) I was thankful that my trainer did a lap with me, even though he had already done 2 laps and then a training buddy did my 2nd lap with me, I HATE doing it on my own, it is a bit scary, being that it is a harbour there is always a possibility of boats going in and out and lets not mention those marine life with BIG teeth.

Thursday and Friday I allowed myself rest in anticipation of Saturday’s race.

Sat – so Aquathon day was upon us, I got up early, 6ish, I got myself some breakfast, packed my backpack full of water, a few snacks of oranges and vita wheats. I was having a few dilemas all week as to how to get to the event, parking is terrible and some of the closest could have been up to 2k away. I decided to ride my bike, it is about 12k to where the start line is and I thought if I just take it easy it won’t have too much effect on my energy for the race, which I did.

I found a few of my training buddies easily, well they found me (even better), registered and picked up the timing chip. Chilled out for a while, wandered around to check out the “Speed demons” in the Long Course race coming across the finish line, the event had a lot of international and Australian Olympic level competitors which is fantastic for the event and the region. Before I knew it the kids race was happening which meant time to head to the marshalling area by the water for the start. For those that don’t know an Aquathon is a Swim and Run event, I was doing the short course which was a 400m swim and a 3k run.

The buzzer started and flurry of arms and legs hit the water, it was pretty crazy for the first 50-100m, almost every stroke you were hitting someone’s foot or someone was hitting or kicking you, by the time it spread out a little we had hit the first turning marker and before I knew it the group who started 2 minutes behind us had started to catch the back of the pack, which I was in, and then you were back in the same predicament with people everywhere. I was pacing myself as best I could and felt reasonably strong in the swim, compared to my last Triathlon, still not very fast, but survival is the key in the swim leg. 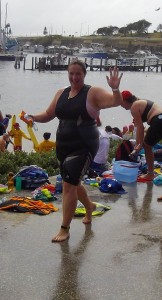 This is me in all my Lycra glory, must remember to suck it in when waving at the camera.

Then you hit the shore and run up the stairs to the transition area, I had a tip from some experts who said to bring a bucket or tub to fill with fresh water to get the sand off your feet, so with this brilliant idea and my elastic shoe laces I was pretty quick, threw on shoes, shirt and sunnies and took off at my blistering shuffle pace.

I have said it before and I will say it again “I HATE RUNNING”, but running with the crowd along the path, I got cheers from a few people who knew me which was really inspiring. The aim of this part of the game was to run a my own pace and not stop, I usually carry my security blanket which is a small sports bottle of water but I forgot and left it in the transition area and also forgot to have a quick drink to wash my mouth out of the salt water (I swallowed a bit). There was only 1 drink station along the course which was at the half way mark, so I sucked it up and kept plodding along. One of my buddies caught me and ran with me until the half way mark and I told her not to wait for me. I wanted to stop the whole way, but the only time I did stop was to guzzle a few sips from the drink station so about 20-30m of walking at the mid station. 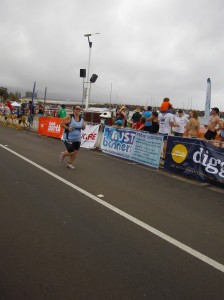 Trying to pick up the pace on the way to the finish line.

I love knowing that I am past half-way point in the run, it helps with the mind games, but it is still horrible, then with about 500m to go, I was trying to take longer strides and get this damn thing over and done with. I managed to get a bit of a sprint happening with about 100m to go and crossed the line. It was a relief to finish. 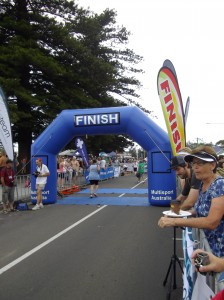 The finish line was a welcome site.

Sometimes I wonder to myself why am I doing this and I still don’t really know. My trainer Ian Gibson from Pioneer Fitness was cheering me on across the finish line and was there to greet all his contenders back at our little camp. Once I had jumped back in the water to cool off we arranged to meet down the track for a coffee (or skim chai latte for me). He said something to me that blew me away which was that “I was his hero”, he has trained me at my biggest and now at my fittest and he said he uses me as an example to say you don’t need to be skinny to be fit, I take absolutely no offence to that because he can’t help me in the kitchen, which is where my weight problem lies.

I then returned the compliment to say that, had I never met him I would not be doing all that I am doing, this man is 1 that truly believes in me and my abilities more than I do in myself and is the same with all his clients. He said I could do a triathlon and I did, he thought I could to the Aquathon and I did. He sets me training goals that are achievable and that I often strive to beat. He is 1 in a Million and I hope he reads this to know how much he is appreciated by me and all his clients. 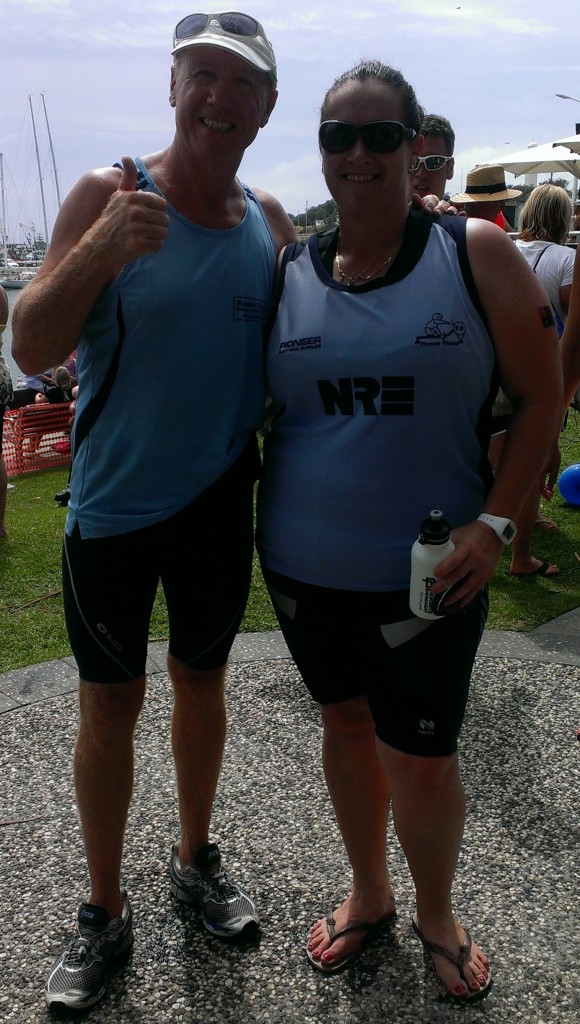 Super Coach, Ian, it’s all his fault that I am fit.

After the Aquathon I then had to ride the 12k back home again, I was tempted to call hubby to come and get me but thought it would be good training to get back on the bike. I took it easy on the way home and I really noticed I had not been riding for a while. Madge “the Vag” was feeling it. I also made the mistake of riding with my runners on, but still with my small clip-in pedals so my feet hurt, I should have taken 5 minutes to put regular pedals back on before I left home.

So the results of the Aquathon are in, and my main goal was achieved, I finished, my 2nd secret goal was to not come last, I just scrapped in coming 3rd last: 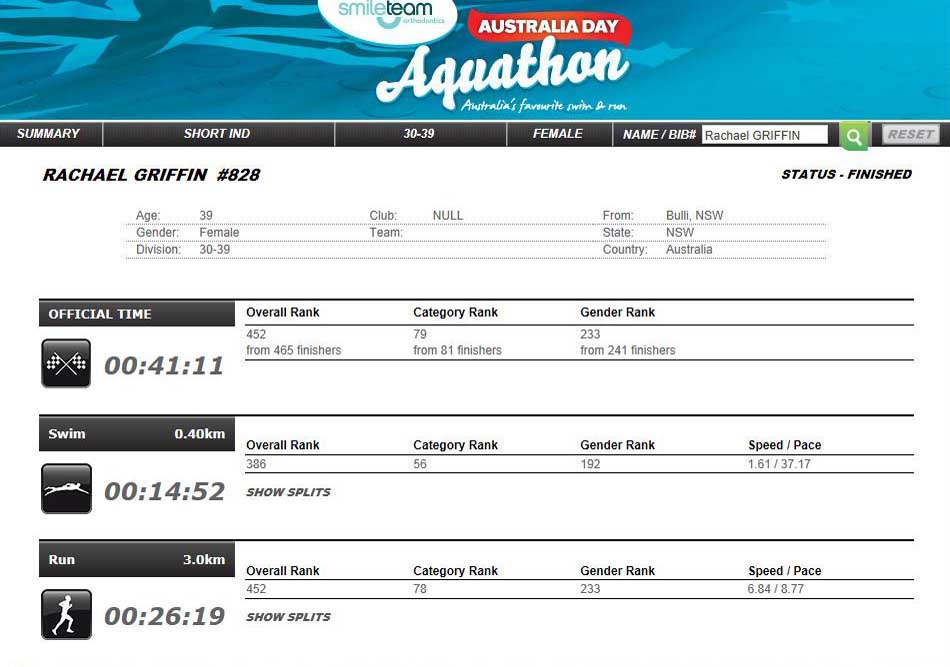 Would I do it all again, hell yeah!

8 thoughts on “The week that was – Aquathon Race Wrap”